The Sixers may have only played two games (and lost both) but watching them this year has been wholeheartedly more exciting, mainly due to rookie Joel Embiid. Simply put I cannot stress how impressed I’ve been with the former number three overall pick thus far in the early 2016 season.

What about Embiid makes me gush? Well, there’s a lot. But the most striking thing to me isn’t really something tangible, instead it’s how natural and polished he looks as a basketball player, a rookie one at that. He has this confidence about him with the ball in his hands and looks like someone with years of experience despite playing just 44 total minutes. He looks unprecedentedly polished with his handles and moves. Actually, his whole career thus far has been unprecedented. Embiid was considered to be the number one overall prospect after only 28 games at Kansas but a surgery to his right foot following the season caused him to slide down and be selected third. He missed his entire rookie year. And the year after that. Not to mention he missed the NCAA tournament while he was still in college. So in his first real NBA games there would surely be some rust right? Not hardly. So far Embiid has put on display all the elements of his game that scouts believed could make him elite. He can step back and shoot, threes even. He has shown flashes of being a formidable defender with highlight reel rejections, including one on veteran Dwight Howard no less. 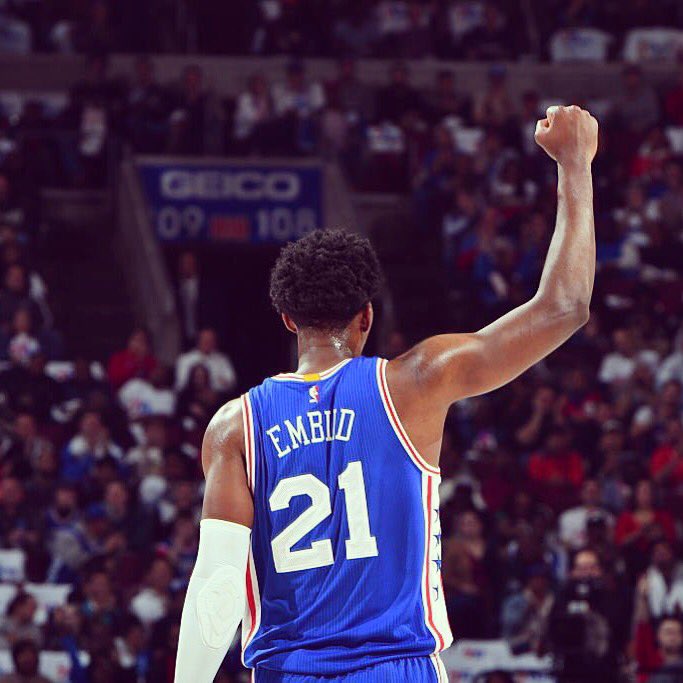 Additionally, another reason i love watching the kid is because his game is plain old refreshing. With so many guard oriented attacks now, it’s cool to see a seven footer handle the rock and lead an offense. He doesn’t look awkward or clumsy like many players his size so often do. He plays like a guard or forward in a centers body.

I must admit that out of all the Sixers young “assets” (remember that word?), I was the most skeptical about Embiid, mainly because of his history of injuries. I still am skeptical to a degree about his body going forward. But thus far, saying he looks impressive would be an understatement. Has he only played two games? Yes. Is he going to make some bad, ugly rookie mistakes this season? Yes, of course. But from this small sample size it’s hard not to get amped about what this guy can do for a success starved franchise in the years to come.