The Phillies have officially announced their additions to the almighty food department down at the ballpark this year. Gratzfeed is a little underwhelmed.

“The first one that jumps out is a new hoagie offering from the very reliable Primo Hoagies, which will be located in Ashburn Alley. Primo Hoagies will offer a variety of hot and cold sandwiches on their fresh baked breads.

While Chickie’s and Pete’s crab fries are often the most coveted item at Philly sporting events, it will have some competition in the French fry department this season. South Philly Shareable Stak will be located behind section 120 and offer boardwalk style fries with the option of topping them with in-house roast pork, sharp provolone cheese sauce, cherry pepper aioli or chopped roasted long hots.

One of the more interesting additions is The Mac Shack behind section 122, which will offer house-made mac and cheese with a number of different toppings. Pretty much everyone loves some mac and cheese but I’m curious to see how that translates to a ballpark snack.

There will also be some new kiosks at Zoom Foods behind section 126, which is described as “the next step in the evolution of stadium food & beverage service, featuring customer-facing, self-ordering kiosks — improving guest experience and speed of transaction time.”

Other existing vendors with new offerings include pulled chicken option from Bull’s BBQ, new signature Hatfield hot dogs including pork roll as a dog topper, as well as new options at Harry the K’s.” 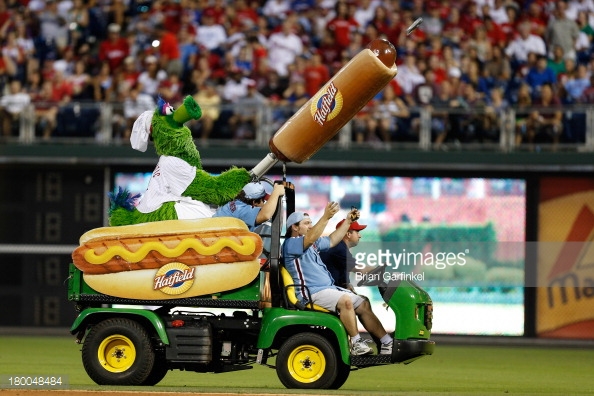 Look the Phillies are most likely going to be a middling .500 team this season. If I’m going to the ballpark this year food is going to be a major reason why. I will gladly miss three innings of baseball to get my hands on some Chickie’s and Pete’s crab fries. Primo Hoagies are great but they have become so prevalent in the tristate area that their hoagies are not going to be the reason I overpay for food at a Phillies game. I eat Primo like I drink water or breathe oxygen. The Shareable Shak fries sound pretty good but as I alluded to earlier crab fries will always be king. With that said roast pork topped fries are going to have to be consumed at some point so I’d say this is one of the more exciting options being added. Homemade mac and cheese sounds pretty appealing too but I don’t know how I feel about sitting in the hot sun while dripping sweat eating some gooey mac and cheese creation. Then there’s the “Farmer’s Market Grain Bowl”. Pass. Hard pass. Donovan McNabb throwing a laser into the ground type pass. Toasted red quinoa? Brown rice? We’re talking about ballpark food right? And then there’s the falafel sandwich. Another pass. I appreciate the effort to add some diversity so I won’t hate too much on that one but….

Where is the crazy heart attack inducing menacing scary stuff?? Ok the fries with pork and cheese sauce are cool. Everyone likes mac and cheese. But where are the sextuple burgers with smoked brisket and bacon with donuts as rolls? Where are the 4 foot hot dogs wrapped in chicken fingers? I read an article highlighting all of the barbaric new foods around the league and the Phillies add Primo and quinoa? The Royals are out there showing off their Pulled Pork Patty melt complete with pulled pork, fried onion, shredded cheddar, Monterey jack, BACON and jalapenos and the Phillies are excited to announce a grain bowl?!?!?!?!?! I want the stuff that gets you so messed up that by the second inning you don’t know who’s playing or how to even stand up. Last time I checked the Phillies ballpark is in South Philly, not Fishtown. I mean everyone knows the best time to go to a Phillies game is for dollar dog night where you grossly indulge in dollar hot dogs but the Phillies don’t have nearly as many as they should. Luckily the Phillies have an already solid pre-existing menu around the park so this isn’t the end of the world. At the end of the day you can never go wrong with the simple baseball fare such as hot dogs and ice cream in a helmet. Just a heads up that there is some work to do for 2018. Both on and off the field.

You can check out the full article right here: