I’ve been wanting to make this list for a while and I mean a while. Definitely a list I thought about making before Gratzfeed was even the premier online blog it is today. Growing up I spent a lot of time with my single dad which led to, lets just say…”ill advised” food trips (if you’re looking at it from a health standpoint). However, if you’re looking at it from a purely pleasurable/magical/sensational standpoint than these food excursions were anything but ill advised but rather well advised, extremely. Living in South Jersey and with my dad being from Philly, cheesesteaks became an instant go-to for us, going late night, before games, after games and just going to the city simply for the sake of eating a good fucking cheesesteak. With that said I’ve had enough cheesesteaks in my life to kill Andy Reid, one for every Sixers loss, one for every dollar in Ryan Howard’s contract (OK maybe not that many but you get the point). Simply put, I’ve tried a good chunk of em and while it may not be something to brag about, at all, it does make me qualified in a world where  my resume comes up short just about everywhere else. Here are the top 5 cheesesteaks

5. Tony Lukes- Anyone worth their weight in cheese whiz will tell you that the key to a good sandwich is the bread. Tony Lukes uses Liscio’s rolls which are pretty damn hard to beat. Put a generous helping of rib eye steak on those bad boys and you’re in business. Tony Lukes is a staple, it’s close to the sports complex and even in the stadiums themselves. To be fair though not all Tony Lukes are created equally, since it’s rise in popularity they’ve expanded at a rapid pace across the tristate area and while those sandwiches are serviceable, they can be underwhelming in size and overwhelming in price so make sure you go to the original on Oregon avenue if you want the true experience.

4. Steve’s Prince Of Steaks- Steve’s has everything you want in a cheesesteak: great tasting meat, lots of cheese, a solid roll, and late hours. If you’re looking for the quintessential Philly cheesesteak vibe then this is your place. Neon signage illuminates the divey atmosphere and nothing screams cheesesteak more than going up to a counter (ripe with every topping you could possibly want) and ordering one. Also, can’t stress the importance of the late hours. Eating a late night steak (sober or not) can be likened to a religious experience. Actually scratch religion, it’s more like marriage, seems like a great idea at the time but then you wake up questioning why you made this life choice that will haunt you forever. Not to scare you though, Steve’s is worth any gym session, guilt trip or self loathing you may endure.

The hidden gem. Another dive, the Folcroft, PA spot has virtually no indoor seating and only a handful of weathered benches outside. Here’s the deal with Leo’s, their steaks are HUGE. Unlike the two aforementioned  places Leo’s chops their meat up real fine and piles it high on the roll. These suckers are juicy and tasty, with just the right amount of delicious cheese. This is definitely the least known entry on the list and with small wait times, I’m not exactly complaining about it. This tiny shop packs a heavyweight punch that can go toe to toe in the ring with just about anywhere else in Philly.

Since 1949 Joe’s was known as “Chink’s” but with everything having to be all politically correct and shit nowadays they changed the name to Joe’s in 2013. Well, being perfectly honest this place could be called Horseshit Steaks and Slop and I’d still eat it because these are some of the best tasting creations the city (or anywhere else in the world) has to offer. For real, the quality of the meat is probably the best of anywhere in the city. Joe’s slices their meat down from a ribeye roll and pairs it with a great roll to make for a truly heavenly match. They also have real, authentic milkshakes which is just what you want to pair with a cheesesteak to show that you really give zero fucks in life. The original on Torresdale Avenue has the old school vibe going too, a big grill right in front of the window piled high with meat, a long counter, some tables, old jukeboxes that I don’t think work, this place has it all. There’s a reason this place has been in business since 1949, can give up it’s name, and still be one of the most popular places. One bite of these and you’ll understand exactly why.

This is the best cheesesteak. The best Philadelphia, or any other place in the world has to offer, hands down. I usually try to not sound so definitive on something opinion based but I’m pretty confident this is fact, science if you will. Navigating this corner shop (which is a total dive, albeit clean), can be likened to a crowded fraternity basement, rubbing elbows with the locals and a lot of “excuse me, excuse me”. Seating is at a premium with really one long “L” shaped counter (they have some tables to the side but the people waiting for takeout essentially take that option away). There are a few tables outside too, but as I write this in December, weather can obviously be a factor. So what makes these the best? It’s really just the perfect combination: the meats amazing, great bread and just the right amount of cheese. The portions are also generous, to say the least. OK, I’ll put it to you this way, they literally stick a fork in it because it’s so packed with meat that you can basically have a second meal just from what falls off the bread. I also like to call this a “cleaner” sandwich in that it’s not overly greasy and the breads never soggy. If you’re looking for the best cheesesteak in Philly, this is your place, without question. 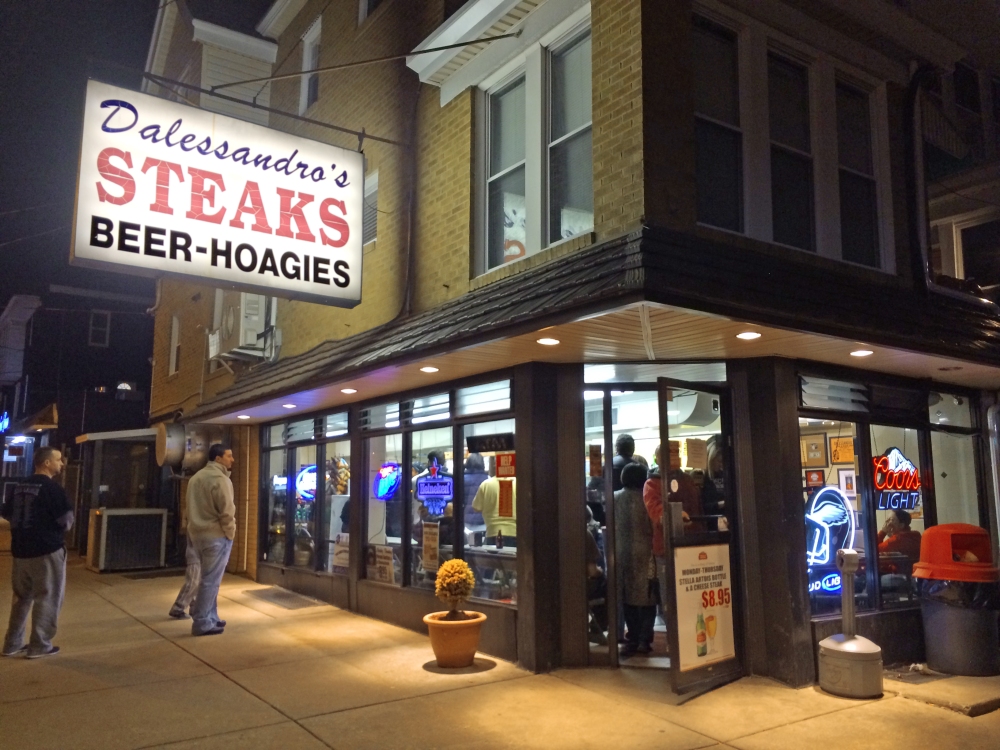 This place is a little deli in with virtually no seating, so takeout is the move here. Packed with flavor and located in South Philly, this makes for a great pit stop on the way to a game.

Campo’s Deli- Campos just has a delicious cheesesteak, plain and simple. Probably the first honorable mention of the top five. They have locations on Market Street and at the sports complex (and Liacouras Center). Not the biggest sandwiches in Philly but the high quality and taste alone cement it’s top ten standing in a competitive circuit.

While Jim’s on South Street is an undeniable powerhouse, Ishkabibble’s is more than a worthy alternative if you want to avoid absurd wait times and still get a delicious steak. Ishkabibble’s also has some of the best fries around so you can have the ultimate combination of indulgence.

Sure you know about their out of this world crab fries but their cheesesteaks are also a standout on their big time menu. Great meat and they top it off with their crack injected (i think that’s the secret ingredient?) cheese sauce. True gluttons (like myself) can even dunk their sandwich into their cheese cup sauce from the fries, now that’s a pro tip right there.