Great fucking stuff right here, so two hooligans decide to rob a convenience store with a sword/machete type weapon, however their shitty plan goes completely awry when they get upstaged by the clerk who as a result uses a way bigger sword to chase off the clowns while severely embarrassing them in the process. Check out this recap right here:

A few things, first lets state the obvious, that the dude who chased these schmucks outta the joint is one of the biggest bosses on the planet. Just running around the store in flip flops with a giant ass sword and his beer gut bouncing around ever so gracefully. He wasn’t even rattled…like at all. He saw this small timer and made the swift decision not to blow his brains out with the gat, didn’t want to waste a single bullet on these lowlifes and decided to fight a sword with a sword. Honorable. This is a good man right here, the type of man who still gives you the cigarettes when you’re a quarter short, the type who spots you the grape game because he knows you’re a regular and good for it, a total bro. He had magnificent form too wielding that thing, I’m 100% positive he used to be a ninja before he took over the reigns of the renowned Perry Market.

Second, no clue who the second guy in yellow is but his breakdown of the situation was A+. His explanation of the series of events was so lucid, like John Madden breaking down a blown coverage or Donald Trump explaining his foreign policy. He spit some knowledge too, talking about how today’s youngsters should be out getting a job instead of trying…trying to rob a convenience store. Really deep shit right there.

Third, either these wannabe robbers were from out of town or just the dumbest sacks of shit ever. Did you watch the video?! The place has 16, SIX-TEEN cameras in it, I’d give the Sixers better odds at winning the championship THIS SEASON than them pulling that off smoothly. It would have been a shame if they died though, really glad that didn’t happen because they clearly aren’t all there upstairs. Hopefully whatever they were raised by finds out about this and puts them back in the cage they belong in. Remember guys, stay in school, get a job (or at least a blog or something) and don’t bring a sword to an even- bigger- sword-fight. 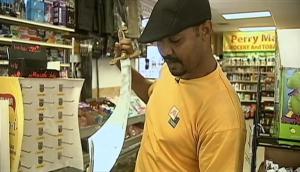