I don’t know how to even start this one, really at a loss right now. Try to follow this run on sentence for me: Ok so Shaq, yes Shaq, one of the biggest and most dominant NBA players of all time (and the lead in Shazam) is djing, yes djing, like playing music, at TomorrowWorld, yes TomorrowWorld, one of the biggest music festivals in the United States. Got that? After retiring Shaq has pursued a career in becoming a tv analyst which he still does as well as a career in law enforcement and now he’s apparently a dj, one good enough to play TomorrowWorld. The 43 year old will be performing under the moniker DJ Diesel.

TomorrowWorld’s lineup was already stacked enough for me. It’s got the usual heavy hitters like Afrojack, Showtek, Tiesto, as well as some lesser known guys who slay like Thomas Newson, Lucky Date, and Dallas K…BUT SHAQUILLE O’NEAL JUST TAKES THIS FESTIVAL FURTHER INTO THE STRATOSPHERE THAN THE BRAINCELLS OF THOSE ATTENDING. I’ve never drank or did drugs before (mom reads the blog now) but I can only imagine that being fucked up while the big fella is shaqtin’ a fucking fool dropping bombs would have to be the pinnacle of life. People would be tripping so hard for that set that they’d think Shaq was actually next to them (it’s just my friend Nana guys don’t worry). I can’t even imagine what he’d be playing, I’m thinking like ‘Jump Around’ and 90’s throwbacks mixed in with some hardstyle and filthy trap.

Having said that, if you are on drugs and paranoid, this whole thing can be a stunt for him to bust people and make a name for himself as a cop. Imagine getting pulled out of the crowd and getting your whole life ruined by Shaq? No thank you, I’ll be on my couch watching football, eating wings and drinking soda that weekend, but don’t worry I’m sure he’s just there to drop bangers for you, seriously no worries.

PS. After an “eventful” date night I once sought shelter on Nana’s futon. The next morning he gave me an appropriately huge SHAQ STARTER shirt that instead of saying back to back to back champion says SHAQ TO SHAQ TO SHAQ AND IT’S MINE FOREVER AND I’M NEVER GIVING IT BACK. 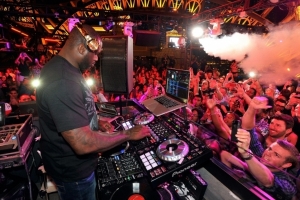 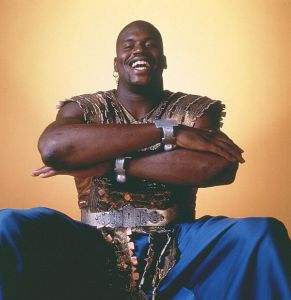