Yeah. Wait. My brain isn’t working. I literally can’t even right now I think I’m blacking out just from the thought of this. Let me gather myself……………..OK SO PIZZA HUT AND KFC MAKE PIZZA FUCKING FLAVORED BUFFALO WINGS. APPARENTLY THIS ACTUALLY EXISTS IN THE WORLD. ACCORDING TO BROBIBLE:

“Some insane mad scientist working in the labs at Yum! Brands — the company behind KFC, Pizza Hut, and Taco Bell — recently created a hybrid food from junk food heaven: Pizza-flavored buffalo wings. According to the find by Buzzfeed, it looks like they integrate mozzarella and cheddar, along with some light marinara infusion.

They’re being sold as “Napoli Crispy Pizza Chicken” in Hong Kong only, according to reports. No word on if release to the states is in the cards.”

If you’re anything like me you already chose overnight shipping for every book you could find on how to speak Japanese as well as started to look for a reasonable apartment to live in. I’d leave this great country for pizza flavored wings faster than you can say Konichiwa Fried Chicken Bitches. Cliff Huxtable drugged girls for sex and Jared from Subway maybe has a fetish for kiddie porn, I’m ready to make the trek. On some real shit, we NEED to make this a thing in America. We need everyone to bombard KFC and Pizza Hut on every platform possible demanding this jawn, right fucking now. I’m going to keep a close eye on which presidential candidates are willing to put in the work to bring this concoction to the states and do everything in my power to make sure they get elected to office. Except Chris Christie, he doesn’t fuck with legalizing pot and I can’t fathom eating this without at least 9 blunts beforehand. But yeah, these are apparently a real thing that exist in Japan, start doing your part to bring this magical creation to America and help restore the nobility that America desperately needs right now. 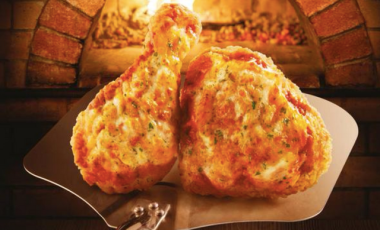 You can check out the original article right here: