Ok so here’s the deal: A Florida (typical) mom was allegedly being held at knife point by her boyfriend in her home while their three young kids were present. Being about as smart as a Florida person can be, she convinced her boyfriend to give her phone back so that she could order pizza for the kids thru the Pizza Hut app where she was able to write that she was being held hostage and needed help. I cannot make this shit up people. According to abc news:

“Treadway and Nickerson’s three, young children were also present during the incident, authorities said, noting that the incident was sparked by an argument the couple had.

Nickerson took away Treadway’s phone, police said, but she was eventually able to persuade him to let her order a pizza using her Pizza Hut app.

“She told him, ‘The kids are hungry. Let’s order a pizza. Let’s get them some food,'” Hays said, noting that’s when Treadway was able to sneak in a written message through the delivery.

Along with her order of a small, classic pepperoni pizza, she wrote: “Please help. Get 911 to me,” according to police. She also wrote: “911hostage help!”” 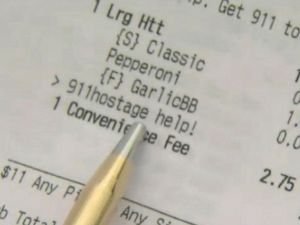 What a fucking JOKE. Some poor guy is sitting on his couch 6 bong rips deep watching Planet Earth waiting for his stuffed crust pizza and flavor sticks, meanwhile the systems all clogged up because of this nonsense. I can’t stand when my friends fight with their significant other in the first place… don’t care, don’t have the time, shoulda woulda coulda been crushing the Jswipe game with Gratz but no, seriously can’t even imagine how enraged I would be if it interfered with my fast food pizza consumption.

And also, lets yet again take a moment to point out what seems to be one of life’s overarching themes that women are never to be trusted. This poor guy, out of the goodness of his heart trusts this snake and gives her the phone so his kids can enjoy some nice, delicious Pizza Hut pizza. What does he get in return? A big fat mugshot for all the web to see and a shit ton of charges like aggravated assault, battery, kidnapping and obstruction of justice. Oh yeah and bail’s set at $45,000. Yes, I know he was holding her at knife point, and while Gratzfeed does absolutely 1000% not condone domestic violence, if she pulled this sneaky shit can you imagine what she must have done for him to go all Knife Party on her in the first place? She probably asked him to do some stupid shit with the kids like drop them off somewhere or something while the playoffs were on. Women, I don’t know if they’ll ever learn.

You can check out the original article right here: http://abcnews.go.com/US/woman-alerts-police-hostage-situation-pizza-hut-app/story?id=30841925&cid=fb_abcn_sf

P.S. peep the pic of the receipt and how it actually says “911hostage help!”, that parts just too classic.